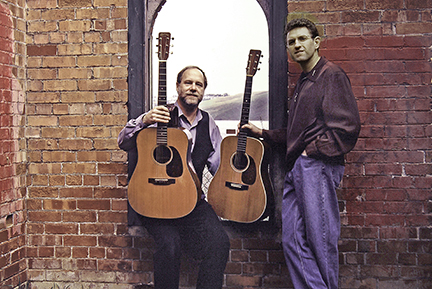 We’re getting down to the shank of the collection as my old pal Bob Alekno used to say. This is the penultimate posting of our vintage videos. Just one more to go after this one.

We just posted these videos:

The Banks of the Ohio is a traditional song that both Jim and I have played forever. We decided to turn it into a tender instrumental duet. Jim plays a beautiful introduction and rhythm part while I play the leads: flatpicking and crosspicking. It’s one of my favorite tunes to pick with Jim. The Banks of the Ohio is from our CD Brothers at Heart.

That’s the Way Things Are was written by Richard March about my father. Rick was my sister Mary’s boyfriend at the time, later my brother-in-law, and from the first time I heard it I thought it very accurately captured the way my father talked and thought about things. Great songwriting craft on Rick’s part. Years later I played it for Jim, he liked it and so we worked up an arrangement  of it. That’s the Way Things Are always seemed to strike a nerve with our audiences. I believe we got more comments about this song than any others we performed or recorded. It’s from our The Way Things Are CD.

Before we end this series of posts I wanted to write a few words about our cinematography team, Theresa Hioki and Christina Antos. Both were my daughter Gennie’s best friends from middle school and high school. In those days I did my best to annoy them in that special way dads do. Luckily they didn’t hold a grudge past their college years when we did the videos.

The one time we worked with Christina was on this project. Like Theresa, she barely said a word and did a fine job. Very professional. Christina pursued writing of several different types and did it very well. She currently works for the Special Olympics.

Theresa worked with both Jim and I separately on instructional videos and I have to marvel once again at her amazing abilities. On all the projects she operated two cameras and recorded the audio all by herself! If you’ve ever tried to do this type of video you know what a mammoth job it is to do just one of those things. On at least one of the projects she set the lights too. And then she edited everything together logically and beautifully. Not only that, she did the audio sessions and recorded the band for my Gypsy Swing and Hot Club Rhythm Vol. II project. At twenty or twenty-one years of age Theresa was a thorough professional. She set things up, told us when the cameras were rolling, and off we went. No delays, no drama. Theresa has since gone into museum management in New York. Here are DVD projects we made with her  help: Art of Rhythm Guitar, Vol 1: Strums, Art of Rhythm Guitar, Vol 2: Walks and Runs, and Swing & Jazz Mandolin: Chords, Rhythm, and Songs. One of these days I’ll finish up my swing and jazz guitar videos that Theresa shot.

It so nice that we got to work with both of them after seeing them grow from kids to very capable adults.

If you’ve run out of shows to binge watch it might be time to binge on solos! I have several book/audio sets of solos for mandolin and guitar where you can learn a whole bunch of leads in the Bluegrass/Country/Old Time style. Check ’em out!

The duo photo at the top of the page is once again by our pal photographer Charlotte Gibb. She’s snapped a lot of frames of us over the years in addition to designing some of our CD covers and posters. We can’t thank her enough. Check out Charlotte’s intimate landscapes on her website. This particular photo was shot, at my request, with my old Ciro-Flex twin lens reflex camera. In retrospect that must have put Charlotte on the spot: to use equipment she’d never laid eyes or hands on before at a photo session. But she was interested, willing to give it a try, and shot some very nice 2.25 inch square transparencies. All the other photos were taken with Charlotte’s 35mm camera. The Ciro-Flex took 2.25 inch square medium format film, which is quite a bit bigger than 35mm and the bigger the piece of film the more detail in the photo. We wanted you to be able to see our wrinkles and dimples in high definition!

My father-in-law gave me the Ciro-Flex. He’d bought it at a White Elephant sale for something like twelve dollars. Jim and I had used it to shoot the cover of our first CD From Fathers to Sons. I’d also used it to shoot artwork for CD covers when I worked at Arhoolie Records in the 1990s. It is a good old camera, somewhat the worse for wear these days, but I still plan to take it to Yosemite one of these days and see what I might come up with.

The photo of me at right is by Kathi Bruce.