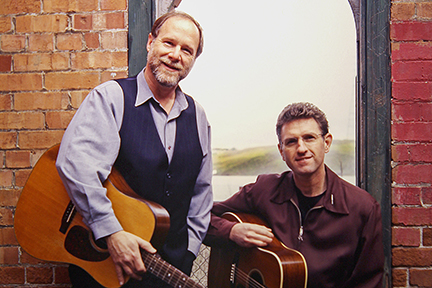 Alas, we’ve come to the final posting of our Vintage Videos of Yesteryear with Jim Nunally and me.

This last video is of a song I wrote titled When I Die. You can pretty much tell what it’s about by the title. If you’d like to go right to the video click here. Or, read on below and I’ll tell you a little about how the song came to be.

I began writing When I Die  in the mid- to late-1970s. The inspiration for the song came from an Elizabeth Cotten concert in San Francisco. She played several of her best known songs including Freight Train, Oh Babe it Ain’t No Lie, Shake Sugaree, probably Vastopol, a couple tunes on the banjo. It was a wonderful concert.

As she’d tell little stories about each song she’d gently strum chords on her guitar. “There was this old woman in town…” strum, strum, “Chapel Hill, North Carolina…” strum strum, “and she would tell on me…” strum, strum, strum, etc.

At one point she played some strums, a huge smile on her face, and said something like, “I’m not going to live much longer…” The crowd gasped and grew silent. She  just kept strumming and smiling, “But it’s alright, I’m eighty-five years old” [I don’t remember specifically what her age was at the time]. She laughed and continued. The audience was stunned. “I wonder what it’ll be like. Will I be up there in the clouds looking down at y’all?” All the while strumming smiling, seeming to be at perfect peace with the whole idea.

Young people don’t think much about death and certainly don’t talk much about it. Nor do night club audiences. But Elizabeth Cotten certainly got my attention at that show. The whole audience was moved and amazed and maybe a little shocked. I’d never heard anybody mention death quite in that way, as a natural, interesting, even positive experience.

In the days and months that followed the concert I kept thinking about what she’d said, how she felt, and how it made me feel. I remembered the thoughts and images pleasantly. My mind kept coming back to the mental picture of Elizabeth up in the clouds looking down on us.

She did live years beyond that show and I got to meet her later with Mike Seeger and shoot some photos. This is one of my favorites.

Not long after the concert I was walking through the woods in Marin County, north of San Francisco. It was a hot and still summer day. From nowhere a warm breeze blew by me and it had an unmistakably familiar feel to it, like a visit from my long gone grandmother Nellie Bruce. It was a wonderful feeling, like a dream, and it was gone in an instant.

This was pretty much a once-in-a-lifetime event for me. I can’t remember it happening before or since. Maybe I don’t pay enough attention or know how to keep myself open to such things. And, I have to admit that I’m the kind of guy who starts to fidget and squirm and roll his eyes when people try to tell me about their own similar experiences. Yet there it was! I’ve been very selective over the years about who I try to talk to about this. I guess the cat’s finally out of bag!

I combined my thoughts about both events into When I Die, adding ideas and images over a long period of time. I officially finished it when Jim and I began working on our The Way Things Are  CD in 1999. I sang it for Jim and he encouraged me to finish it, tighten it up and to finally settle on the several verses that you’ll hear. We hope you enjoy listening to When I Die and to all the other songs.

I recently got together with Jim on The Nell & Jim Show. They invited me on to chat and to do a couple songs solo. It was great to see them both and a lot of fun to do. I went all out and even put up a backdrop for the sake of the video! I know Nell and Jim were quite impressed. You can view the show by clicking here.

If you’ve run out of shows and Jim and Dix videos to binge watch it might be time to binge on solos! I have several book/audio sets of solos for mandolin and guitar where you can learn a whole bunch of leads in the Bluegrass/Country/Old Time style. Check ’em out!

The duo photo at the top of the page is once again by our pal photographer Charlotte Gibb. We can’t thank her enough. The photo of me at right is by Kathi Bruce.