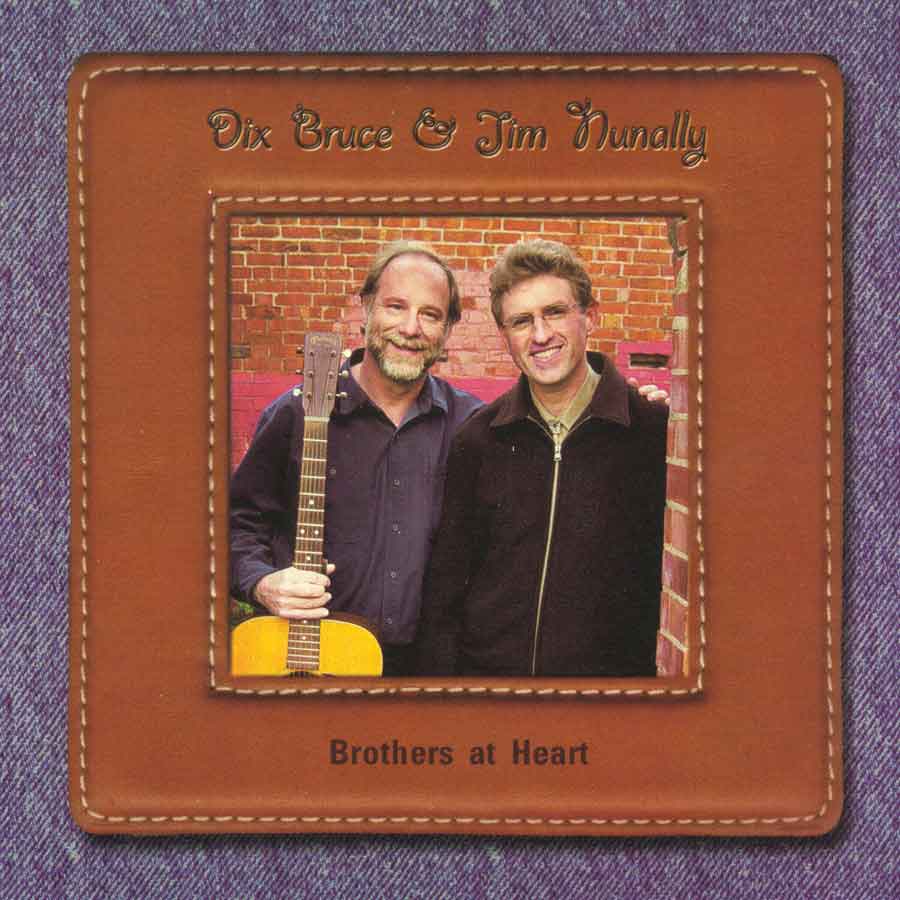 Jim & Dix’s newest collection, Brothers at Heart includes fifteen of their favorite songs and tunes, most of them traditional, a couple originals, performed in the “brother duet” style. If you love simple and straight forward singing and picking you will surely want to get a copy.

Watch seven vintage videos (posted in early 2020) of Jim Nunally performing, playing and singing with Dix Bruce. Click here for information on each video plus links.

Reviews of Brothers at Heart

“Flatpicking aficionados should find themselves thoroughly engaged by this tribute to the classic brother-duet style of acoustic country music. The material spans the traditional and newly composed and the singing is warm and inviting, but it’s the guitar playing that’s most intriguing. Dix Bruce and Jim Nunally are fine pickers whose approaches are very different yet complementary. Nunally is an amazingly economical player, coaxing every bit of music out of a fingerboard position, while Bruce’s approach is more di- atonic and melody-driven. This combination of contrasts makes Brothers at Heart a fascinating lesson in diverse ways of interpreting a song on the guitar.”

“Bluegrass duet albums are rare treasures. Dix Bruce and Jim Nunally, guitarists of unsurpassed renown have completed a delightful “two voice-two guitar” album that bruises the bottom of the listener’s jaw. The mood is relaxed, the musicianship confident but not showy. Paying homage to the “brother” stylings of yesteryear, this California-based duo performs many songs that have long been treasured as well as several with less familiarity. Among the latter would be “Poppies,” a song of honour and remembrance and “The Golden Slippers,” the 19th Century number that has been performed by many though rarely as here. In the former, renditions of “Reuben’s Train” and “Dark Hollow” are always welcome. “The Banks of the Ohio,” presented instrumentally, sheds the tragedy of the lyrics while highlighting the elegant melody.

Their voices weave through and over each other’ tastefully, blending where they should while shadowing each other at other times. The playful original “Mike’s Marathon” allows the musicians to breakout a bit and display that they can fire off the flashy licks as well as anyone in the business. One will be hard pressed to find more adept, clean bluegrass guitar playing than that found here.

“I’m really impressed with the music that the two of you are now making. You just seem to get better and better as time goes on. I appreciate the respect that you give to older country music and the people who created it. Yet while you demonstrate your affection for older music, and exhibit your indebtedness, you nevertheless make the music sound fresh and timeless. It is rare to find two young men, who are not brothers, achieve the blend and compatibility that is associated with the music of the Brother Duets. The good spirits and warm exchanges that characterize your stage performances are easily transmitted to your listeners. It reminds me of the sweet camaraderie that existed among the members of the Goose Island Ramblers. Dix, you learned from the masters, and it shows! And, by the way, you guys sure can play!

Bill C. Malone, professor emeritus of history at Tulane University, author of “Country Music, U.S.A.”; “Southern Music/American Music”; “Singing Cowboys and Musical Mountaineers”; “Don’t Get Above Your Raisin'” and more. Host of “Back to the Country,” WORT-FM (89.9) Madison, WI.

“…Am really enjoying “Brothers at Hear” in a big way…thanks! Not only are they “Brothers at Heart,” but Jim and Dix also qualify as”Brothers in Soul and Spirit!” as well…their many years of mutual love for the genre really shows in this exceptional project. Methinx that folks at the Country Music Hall if Fame better start thinking about adding a new line on the ‘Country Duets’ Hall of Honor plaque!”

“Brother duets are one of the purest forms of music; two voices, two instruments and many of the top bluegrass acts have featured this format: the Monroe Brothers, Reno and Smiley and Jim and Jesse are just a few. Dix Bruce and Jim Nunnally have very busy careers with other bands and projects but when they get together their voices and guitars naturally blend. Many of the classic songs included here are jam session standards, and listeners will appreciate the duo’s version of “Dark Hollow,” “Eight More Miles to Louisville,” “I’m Sitting On Top of the World” and “Jimmie Brown the Newsboy.” Since Flatpicking Guitar magazine produced this album, it’s no surprise that twin guitars are featured on many of the cuts. Jim and Dix’s intricate arrangements show the scope of the guitar sound with melodic licks punctuated with powerful strums and rhythm. Guitarists interested in hearing and learning vocal accompaniment styles will find this album very useful. Two instrumentals on the album show the robust sound of two guitars. “Banks of the Ohio” is very melodic while “Golden Slippers” has more of an upbeat, dance tune feel. An album highlight is Jim’s song using Wilma van Peski’s poem, “Poppies.” The tribute to fallen soldiers was written after World War I, but it has a message that rings true in today’s times. Definitely a classic album in the making and one that will be a welcome one in your collection. B. Hough Northern California Bluegrass Society Review 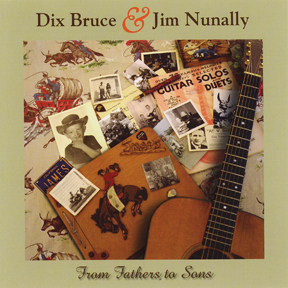 From Fathers to Sons 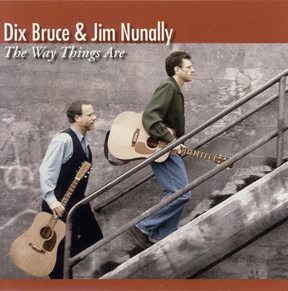 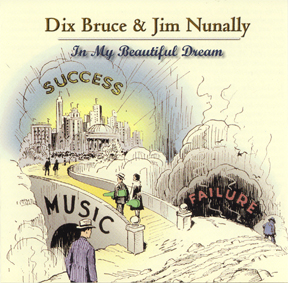 In My Beautiful Dream

If you live within the USA:
Priority Mail is the fastest option. It usually takes between two and three business days to arrive. That’s an average and not guaranteed. If you need a guaranteed delivery, e-mail us about Express Mail. Contact@musixnow.com

If your order weighs just a few ounces, for example our Dawg Picks, we send it via First Class Mail unless you specify that you want it sent by Priority Mail. First Class Mail usually takes around three days to arrive. For slightly faster service, Priority Mail is the way to go. Most of our products (excluding “The Parking Lot Picker’s Songbooks” which weigh two plus pounds) weigh under 16 oz. and can be shipped for the minimum Priority Mail rate, which is currently $7.75. For book/CD sets like our “Gypsy Swing & Hot Club Rhythm” we can usually ship two for one Flat Rate price.

Media Mail is much less expensive than First Class or Priority mail: only $2.80 for the first pound. Media Mail takes ten days to two weeks to arrive. It’s also restricted to printed matter such as books, CDs, DVDs, etc. Regular merchandise may not be mixed with books, CDs or DVDs and sent via Media Mail. For example, if you order, “Getting into Bluegrass Mandolin” book/CD set and Dawg Picks and click the “Media Mail” box in the shopping cart, we can ship the “Getting into Bluegrass Mandolin” book/CD set by Media Mail, but we’ll have to send the picks via First Class and there will be an additional charge for the second package.

If you live outside the USA:
Air Mail (six to eight days to arrive) is the best option. Canadians should choose “Canada” for shipping their choice, Europeans should choose “E.U.” Our shopping cart only calculates by the pound but we’ll adjust your shipping rate down if at all possible. For example, if your package weighs 2lbs and 4oz, we may be alble to give you the 2lbs and 4oz rate rather than the 3lb rate, depending upon where you live and how the postal service calculates fees. If you’d like to know the cost of shipping BEFORE you order especially for PayPal customers, just drop us an e-mail ( Contact@musixnow.com ), tell us which products you want and where you live in the world. We’ll calculate the amount and e-mail it back to you.