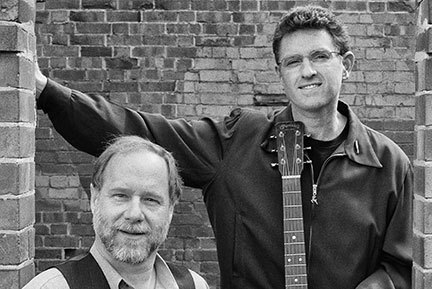 Over the past few weeks we’ve been posting re-discovered videos of Jim Nunally and me playing music. We’d recorded the videos in 2009 but never got around to finishing or publishing them. We decided to make some final edits, add titles, put them on YouTube, and invite you all to take a look and a listen.

We just posted two more that we hope you’ll enjoy:

Here are the videos we posted previously:

If I remember correctly, I officially met Jim Nunally on a live radio show in San Francisco in the late 1980s or early 90s. The show was KQED-FM’s West Coast Live with Sedge Thomson. Jim was performing with Alison Brown and I was with a group of musicians celebrating the release of my Tuxedo Blues recording.

I loved what Jim and Alison did, got to know them both, and played music with each of them. Alison soon moved out of the Bay Area and I didn’t see her again until a couple of years ago at Gerald Jones’ Acoustic Music Camp.

Jim and I continued to make music together recording and touring for a number of years. Today’s “new” videos are Your Tone of the Blues and Nobody Sleeps at My Place.

In making our first CD From Fathers to Sons Jim and I wanted to thank a lot of the musicians that had influenced us down through the years. Jim’s father, who was a guitarist and singer, had recently passed away and Jim wanted to pay tribute to all that he’d learned from him. I hadn’t had a tragedy in my life like Jim’s but I did want to remember and say thanks to all those who’d helped me too.

In addition to paying tribute to our early and continuing influences we wanted to each contribute one original song to the project. I guess to show that we’d taken these lessons to heart and carried them on with our own songs. Jim’s was Your Tone of the Blues. Mine was a song called How Can You Treat Me So? which we never videoed. You’ll have to listen to it on the CD! However, Nobody Sleeps at My Place is an original of mine from our The Way Things Are CD.

I can’t tell you what prompted Jim to write Your Tone of the Blues, you’ll have to ask him. I do know that it has reached people in far-flung places around the globe. We were once sent a recording from somewhere in eastern Europe of a musician who’d heard Your Tone of the Blues and recorded it. It was sung in heavily accented English, “Your tone of de bloos…” You never know where these things will end up or who they’ll touch.

Nobody Sleeps at My Place was inspired by a real life event. I’d had a late gig, got home, and was greeted by the dog and cat. Everybody else was asleep. I made a snack and the dog and cat both padded over the kitchen linoleum for a handout. I heard the sound of their nails on the floor and that audio image stayed with me. I wrote the song around it.

When we recorded it on our The Way Things Are CD we decided got do something a little different with Nobody Sleeps. Our thing has always been two acoustic Martins and vocals. For this one we added horns: clarinet, trumpet, and trombone. Man, was it a fun session! You can hear that version on the CD. The video is just Jim and me.

We hope you like these songs and videos! We have a few more to post in coming weeks.

The photo at the top of this page is by Charlotte Gibb. The photo at right is by Kathi Bruce.