Special price: Through January 2021, save 20% off the list price with our special introductory offer.

My sincere hope is that the materials in these books will help you learn to play rhythm and leads, chords, melodies, chord progressions, and songs in the Hot Club-style and prepare you to jam with other Gypsy Swing musicians, maybe even form a band, and have a great time playing this magnificent music!

The Gypsy Swing & Hot Club Rhythm project got its start in 2007 when I went to a weekend-long Django Reinhardt festival south of San Francisco. The performers were some of the leading players of Gypsy Swing/Jazz from around the world. The music was fantastic – beautifully played and wonderfully exciting. But it was the unexpected scene around the theater that captured my attention. Everywhere, down the block, in front of the theater, in the lobby, hallways and staircases, were knots of two and three musicians jamming their hearts out on standards from the Hot Club Swing/Jazz repertoire. All around the theatre musicians wore their guitars on their backs or held their violins in their hands ready to jam at any opportunity. Wherever there was an empty square yard of space, small groups of musicians assembled, played a bit, broke up, and reassembled to play more.

I was amazed at the number of audience members who came to the festival not just to hear great music but also to play it themselves. It was inspiring to witness their fervent efforts to connect with other like-minded musicians and jam on a few tunes in between the main acts on the stage. Something was definitely happening here. I had no idea that Gypsy Swing had become so popular.

But why not? Gypsy Swing, popularized initially in the mid-1930s by Django Reinhardt on guitar, Stephane Grappelli on violin, and the Quintette of the Hot Club of France, is exceptional and exciting music. I’d discovered it myself in the 1970s and have worked on learning it for over forty years. Even after all that time I’m still awed by the original recordings of Django and Stephane and the Hot Club Quintette. I hear more in their music and learn more from it each time I listen.

That original Gypsy Swing sound, especially the playing of Reinhardt and Grappelli, has inspired musicians for over eighty years. Musicians, string players especially, hear that passion and energy and think, “I want to do that!”

Of course Gypsy Swing, like any other style of great music, is not easy to play. It requires a deep knowledge of early 20th century pop songs, chords, melodies, and an ability to physically play all three on an instrument. How does one get started when there’s so much to know and such a steep learning curve? How can you play in a band until you’ve worked out these basics?

Seeing all those impassioned and aspiring Gypsy Swing musicians hungry to play with others got me thinking. I’d always found that the best, quickest, easiest, and most fun way to learn music was by playing with a band. I wondered if I could put together a book/audio combination with a recorded Gypsy Swing band that students could play along with to learn chords, chord progressions, melodies, songs, and to practice soloing. It would have to be something dynamic that musicians could work with and practice the basics, at both slow and regular speeds, over and over again until chords, progressions, melodies, songs, and soloing became comfortable and second nature. That would be a great way to prepare musicians to jam with others or play in a band. Gypsy Swing and Hot Club Rhythm was the result.

I hope you’ll click the links above and check them out! 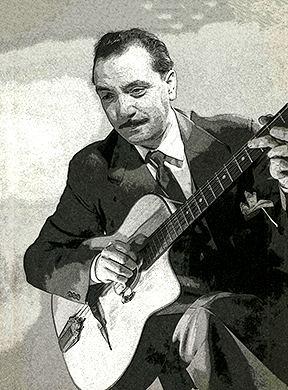