Look at it Rain 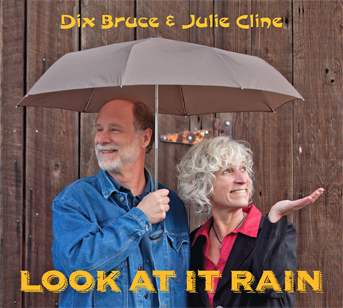 Dix Bruce and Julie Cline sing and play a wonderful mixture of Americana and original music on guitar and mandolin. Their beautiful vocal harmonies make everything they perform, from bluegrass to blues, folk to country, rockabilly to originals, a pleasure to listen to.

Look at it Rain (Musix CD 110)
includes a mixture of traditional and original songs arranged to showcase their duet singing and instrumental sound.

Little Birdie, Making Believe, Take This Hammer, I Get Blue, There’s More Pretty Girls Than One, Fair and Tender Ladies, Shady Groves, Darling, Will You Ever Think of Me?, Look at it Rain, The Banks of the Ohio, Just Someone I Used to Know, Pretty Polly, Frogs for Snakes, I Am a Pilgrim, Where the Soul Never Dies.

Click these links to see videos of Dix and Julie performing the following songs:

Just Someone I Used to Know

Making Believe. This moving ballad of love lost from the mid-1950s was one of country music queen Kitty Wells’ greatest hits. Dix and Julie turn Making Believe into a country duet in the classic style, with Julie singing lead.

Take this Hammer, with lead singing by Dix, features close instrumental interplay between Dix on guitar and Julie on mandolin.

I Get Blue was written by Dix and it’s a fun, up-tempo romp, a tongue-in-cheek mediation on wasted love. It has an acoustic rockabilly feel with Dix’s muted guitar solo and the flat out rock ‘n’ roll of Julie’s hot mandolin lead.

There’s More Pretty Girls Than One is a waltz with duet singing throughout, Dix on lead. The title speaks for itself.

Darling, Will You Ever Think of Me? was composed by Dix as an homage to the Carter Family. It’s a duet with Dix singing lead. In the chorus of the song Julie sings a descant or counter-melody to Dix’s lead.

Look at it Rain, another original by Dix, is an up-tempo, bluegrass-style, song about… well…rain. But rain in the metaphorical sense. “Look at it Rain” is the title song of the CD.

The Banks of the Ohio is a beautiful instrumental arrangement of the popular traditional song. Both Julie, on mandolin, and Dix, on guitar, explore various ways of playing the melody using flatpicking and crosspicking.

Just Someone I Used to Know is one of the best country songs ever written about the pain of breaking up. Jack Clement’s moving song has been recorded by Porter Wagoner and Dolly Parton, Emmy Lou Harris, Rhonda Vincent, and others.

Pretty Polly, which PBS described as an “eternal song” originated hundreds of years ago in the British Isles. This American version tells the gripping story of a romantic liaison that ends in murder. Dix and Julie’s hard-edged vocal duet and unique two-mandolin performance captures the stark drama of this brutal tale.

Frogs for Snakes. Dix and Julie both love the sound of traditional blues played on mandolin and guitar. “Frogs for Snakes” was written by Dix and he and Julie give it a grooving, old time/bluesy acoustic string treatment.

I am a Pilgrim, with Julie singing lead, is a well-loved song that’s been performed by countless musicians in a variety of styles.

Where the Soul Never Dies is another vintage song with a hopeful message. Dix sings lead with Julie on harmony throughout. As with “Darling, Will You Ever Think of Me?” Julie sings a descant or counter-melody to Dix’s.

Look at it Rain Review (Brenda Hough–Bluegrass by the Bay)

Dix Bruce and Julie Cline have assembled a fine selection of original and well-loved Americana songs. Their smooth vocal harmonies soar above a guitar and mandolin backdrop.

“Shady Grove” is given a makeover with both a modal folk-style section and an uptempo bluegrass version. “Fair and Tender Ladies” features Julie’s lead vocal and the warnings mentioned in the song are still worth heeding. “I Get Blue” is a Dix Bruce original and the bouncy rhythm underscores the singer’s frustration with his lover. “Look At It Rain” is another Dix original and the duo’s bouncy harmony is matched by a rolling guitar rhythm and mandolin punctuation.

Dix’s smooth guitar playing and Julie’s seamless flow from solo to rhythmmandolin are showcased in a crosspicked version of “Banks of the Ohio.” Dix and Julie perform a energizing two-mandolin accompaniment in their version of the classic murder ballad “Pretty Polly.” Dix’s instrumental “Frogs for Snakes” is given a bluesy, rough-edged treatment that just sets a perfect groove.

The album ends all-too-soon with a rendition of “Where The Soul of Man Never Dies” graced by their counter melody harmonies.

Some singers have a perfect symmetry in their voices and a gentle balance in their instrumental skins; Dix and Julie have a magical blend that will invite repeated listenings and joyous sing-aIongs from their listeners.

If you live in the USA:

Priority Mail: Priority Mail is the fastest option. It usually takes between two and three business days to arrive on average. (The 2-3 day delivery time is not guaranteed. If you need a guaranteed delivery, email us at contact@musixnow.com to ask about Express Mail.)

If your order weighs over 16 oz., we use a USPS Medium Flat Rate Priority Mail box. That rate is currently $17.60 for as much merchandise as we can fit.

Media Mail: Media Mail is restricted to sending only printed matter such as books, CDs, DVDs, etc. Regular merchandise (such as Dawg Picks or matted photos) may not be mixed with books, CDs or DVDs. Media Mail is much less expensive than First Class or Priority mail: currently only $3.49 for the first pound. Media Mail usually takes about 7- 10 days to two weeks to arrive.

If you live in Canada:

We ship items to Canada via International First Class Mail. The cost is based on the weight. Please choose “Canada” as the shipping choice.

If you live outside the USA/Canada:

BEFORE placing your order, please email us at contact@musixnow.com for shipping information. We usually ship via International First Class Mail. Tell us which items you want, and we’ll email you an invoice to let you know what the total charges will be and how to submit your payment. We will also confirm that first class mail is available in your location, since service has been suspended in some countries due to the pandemic and other delays.

Shirts and hoodies (currently available only within the USA) are shipped separately from a different location and the price of the item includes shipping. Other books or merchandise ordered from the Musixnow website will arrive in separate packaging and probably on a different date from the apparel order.

If you have questions on shipping, please e-mail us: contact@musixnow.com.