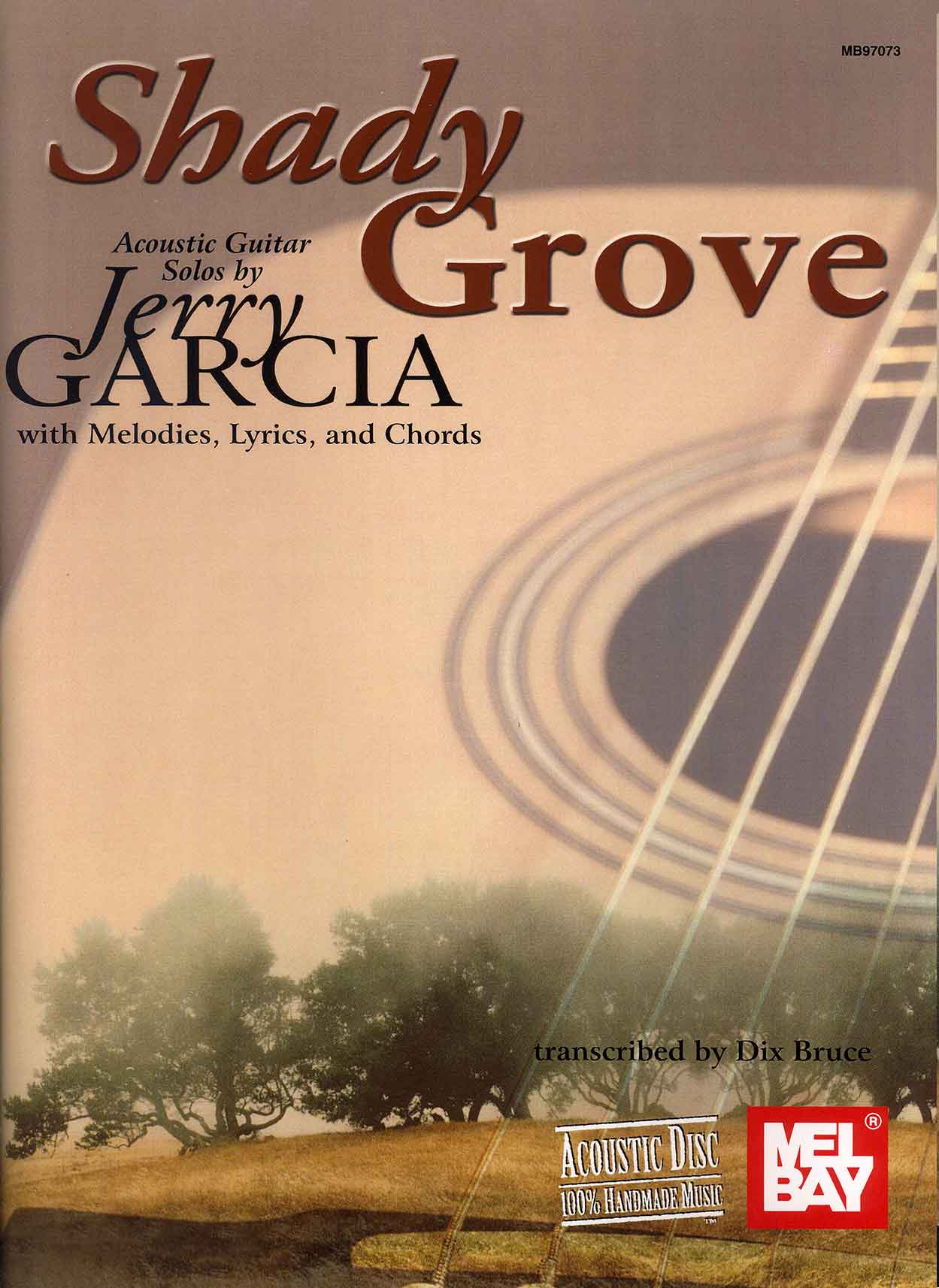 Dix Bruce transcribed all the melodies, lyrics and chords to all the songs (13 official cuts as well as one bonus “mystery” cut) plus all of Jerry Garcia’s guitar solos and several of his backup parts presented in both standard notation and tablature. It’s a great collection of Americana songs played and sung with wit, soul and sincerity. Learn to play them all!

“…With the release of the ‘Shady Grove’ book, fans not just of Garcia, but of folk guitar in general, have an opportunity to learn — and cop — his guitar lines note for note. Transcription veteran Dix Bruce, a man with over 30 instructional books and videos under his belt, not to mention an accomplished musician and composer in his own right, undertook the task of putting those sounds on paper.

Like someone who thinks a manual is more suggested reading material than it is instructional scripture, I skipped straight to my pre-determined test drive — “Jackaroo” (a.k.a. “Jack-a-row”). With guitar and remote in hand, I cued up the track on my CD player. Several things became quickly apparent: 1) Jerry’s seemingly effortless lines belie their actual complexity; 2) I’m clearly better served in front of a computer than a microphone; and 3) with a little practice and patience, and Dix Bruce‘s help, you, too, can play… like Jerry Garcia.

One of the nice things about “Shady Grove” is that the book doesn’t just leave you to your own devices, giving you sheets of music and nothing more. Instead, each song has accompanying tips, tricks, pearls of wisdom that serve as a running commentary to help the reader better understand what Garcia is doing…Another nice touch is that on tracks such as “The Sweet Sunny South,” Dix transcribes Garcia’s banjo parts so we six-stringers don’t feel neglected.

… should appeal to players at just about any level. For beginners, who are likely to be concentrating on learning songs in general, “Shady Grove” is a resource they can grow into, learning the chord progressions and overall feel of the songs at first, and later tackling the lead lines when they’re ready. Those who will find the most utility in the book, however, will be intermediate players looking to bolster their lead skills, as well as more advanced players who wish to expand their repertoire to include folk and bluegrass lines.”

“ambitious…offers a revealing, and relatively accessible, point of entry for those wanting to gain familiarity with Garcia’s…playing.”

If you live in the USA:

Priority Mail: Priority Mail is the fastest option. It usually takes between two and three business days to arrive on average. (The 2-3 day delivery time is not guaranteed. If you need a guaranteed delivery, email us at contact@musixnow.com to ask about Express Mail.)

If your order weighs over 16 oz., we use a USPS Medium Flat Rate Priority Mail box. That rate is currently $17.60 for as much merchandise as we can fit.

Media Mail: Media Mail is restricted to sending only printed matter such as books, CDs, DVDs, etc. Regular merchandise (such as Dawg Picks or matted photos) may not be mixed with books, CDs or DVDs. Media Mail is much less expensive than First Class or Priority mail: currently only $3.49 for the first pound. Media Mail usually takes about 7- 10 days to two weeks to arrive.

If you live in Canada:

We ship items to Canada via International First Class Mail. The cost is based on the weight. Please choose “Canada” as the shipping choice.

If you live outside the USA/Canada:

BEFORE placing your order, please email us at contact@musixnow.com for shipping information. We usually ship via International First Class Mail. Tell us which items you want, and we’ll email you an invoice to let you know what the total charges will be and how to submit your payment. We will also confirm that first class mail is available in your location, since service has been suspended in some countries due to the pandemic and other delays.

Shirts and hoodies (currently available only within the USA) are shipped separately from a different location and the price of the item includes shipping. Other books or merchandise ordered from the Musixnow website will arrive in separate packaging and probably on a different date from the apparel order.

If you have questions on shipping, please e-mail us: contact@musixnow.com.