A Bit of Christmas Cheer 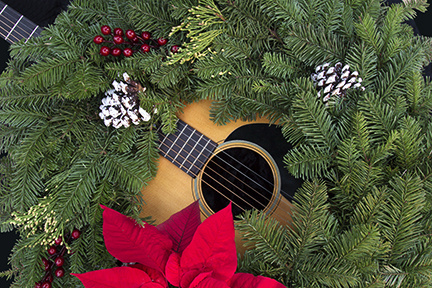 Each year during the holiday season I like to post some appropriate holiday music. It’s usually an ancient carol or traditional melody played on guitar or mandolin. This year, in these special and unusual times, I decided to do something a little different. I hope you enjoy it.

In my last blog I wrote about missing playing music face-to-face with all my musical pals. This time of year is usually pretty busy with all kinds of different gigs and musical get-togethers. For the past 40 years or so I’ve played at a lot of holiday-themed events, parties, jams, tree lightings, big and small happenings, quiet and loud, crazy and reserved. I get to see and play music with lots of people I don’t see very often. I look forward to the season and the gigs. So, it just doesn’t seem like the holiday season without a lot of rushing around the San Francisco Bay Area, into the City, down the Peninsula, up to Wine Country. You’re happy to be working and happy to be part of all these fun events. It’s often quite a frenzy with a packed few weeks between Thanksgiving and Christmas Eve and then nothing until New Years. And almost always nothing for weeks after in January.

Over the past few days I’ve been remembering Christmas Gigs Past. One recent holiday gig (meaning at least a year ago) required a trip to Market Street in San Francisco to start playing at 8:00 AM as a company’s employees arrived for a holiday breakfast. I left the home about 5:30 AM. I turned down another one that would have started at a mall at 6:00 AM. Every guitar player has to have limits!

Other gigs involved dressing in elf costumes which the agent provided. They were one size fits all elf sacks with booties (meaning footware) and little elf hats. Mrs. Claus looked great but I don’t think our visuals worked as convincingly. Most of us were 5’11” or taller with beards. Not exactly the picture of elfishness. Then again I guess show business is all about the willing suspension of disbelief. I disbelieved that we looked like elves.

For many years I played an annual holiday party at an exclusive private club on Nob Hill in San Francisco. The uniform was tux, which is just fine with me. Most people look good in a tux provided that the suit is black, the shirt is not ruffled, and that all articles of clothing fit the wearer within a size or two or three.

This is not to say that certain people can’t really rock a tux of a different color with “alternative” shirts or accessories. I’ve seen former Secretary of State George Shultz at several parties in San Francisco wearing his red plaid tux. (At one he danced by the band and said to us, “You guys got a good beat!”) But I digress.

It was made abundantly clear to us at this toney private club that we were to ONLY come in through the back door, use the back stairway and the service elevator. And leave by the same route.

At first that kind of treatment seems a little harsh and classist but, it is their party, their club, and they hired us. What do I care? We don’t necessarily want to be pals. And again, for the sake of show business, an invisible entrance and exit do make for a cleaner presentation. I wouldn’t mind being able to do that gig this year.

Another holiday party at the same club featured an elaborate buffet that the band was actually invited to tuck in to. I remember lots of very good food displayed around large ice sculptures with a Christmas theme including reindeer and that most famous reindeer of all, Rudolph. Rudy had a big ol’ red nose made of ice that almost glowed. Of course being carved from ice, Rudy melted as the evening wore on like Frosty on a spring day. After an hour or so it looked like Rudy had a bloody nose. The boys in the band got a big kick out of that!

I remember many, many duo gigs with my old friend Mike Wollenberg on guitar, me on mandolin: The Holiday Duo. We started the duo about 35 years ago. Huge range of different types of jobs, many with interesting memories.

Mike is just great. He mostly performs and records as a solo guitarist but he is a wonderful ensemble player too. Be sure to look him up if you ever get to the Bay Area. He put out a fine holiday music CD last year.

As I write this the many different gigs come flooding back. They tend to swirl together in my memory and with some it’s not clear which happened when or where. But they’re all wonderful memories. I’m so glad I’ve got ’em!

I thought I’d post a few snippets of a trio I work with called Santa’s Little Helpers. I may have posted one or more of these before but, what the heck? it’s the holiday season! Me on banjo/guitar and vocals, Don Neely on reeds, Bill Rinehart or string bass/tuba.

A few years back an agent called me wanting something “fun and irreverant, with a little bit of attitude.” Agents are always saying things like this. I never have a clue what they want. “You know…something kicky!…Awesome!” OK, coming right up!

My first thought was, “what could be more fun, more irreverant, have more attitude than banjo and tuba with a clarinet/sax player?” Fun would surely abound! Maybe we’d only get the one gig but it was worth a try.

Don and Bill and I rehearsed and recorded some of our ideas. I’ll post a few below. 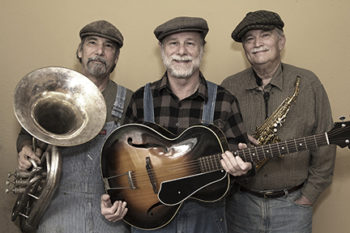 The music we make is kind of New Orleansy-Dixieland-Jazz-Pop Holiday and it is just too much fun! We held back on the Punk-New Wave-Andy Williams-Goth-Windham Hill influences. Yeah, we were going for the commercial gigs. Ans yes, I think we’re ready to sell out if the big dough is offered.

Last year we had a fair amount of work and were looking forward to more this year. Alas, it was not to be. As I listened to the recorded songs I smiled remembering the good musical times had with this trio. These cuts were meant as demos and are quite short but I’m sure you’ll get the drift. I hope you get a smile out of them too!

Happy Holidays to you all!